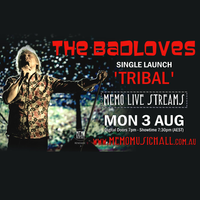 The Badloves 1992 debut album “Get On Board” peaked at #5 on the ARIA charts achieving double platinum status and hovered in the charts for a gravity defying 69 weeks. Throughout the 90’s they enjoyed hits with “Green Limousine”, “Lost”, “Caroline”, “Slave”, “Barefoot Bride” “Memphis” and the Top 5 hit “The Weight” with Jimmy Barnes. That is the history.

Frontman Michael Spiby is keeping The Badloves legacy alive and relevant with their recent new single ‘Soulbrothertruckinsong’ that immediately takes you back to their trademark sound from 1993 featuring Hammond organ and Spiby’s rich soulful vocals.

Their follow up single “Tribal” is scheduled for release on 30 July 2020 and will be performed for the first time live at Memo Music Hall on Mon 3 Aug.

The lineup will feature:

Expect to hear an album from the band to follow in early next year.

The Badloves in 2020 has exactly the same authenticity Michael Spiby established in the ‘90s.

Once again, welcome aboard.